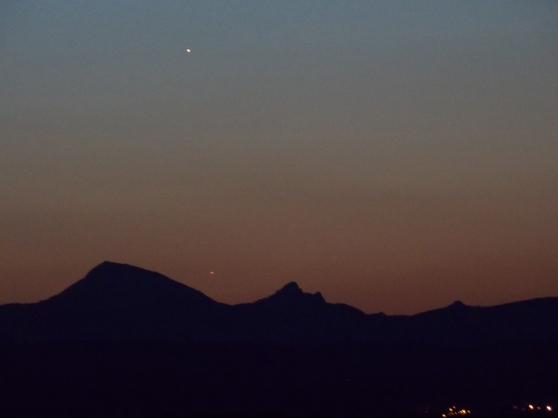 The Star of Bethlehem was associated with several heavenly signs that announced the coming of Israel’s Messiah. The star itself was the planet Jupiter. It was involved in a unique series of symbolically royal celestial events along with other planets, stars, the sun and moon. This series of events had not been seen before in the history of eastern astronomy. The Babylonians called the royal star MUL.BABBAR, which means the “white star.” One of the significant events involved the first visibility of Jupiter in the morning sky just before dawn as it emerged from the solar glare. In the year of the Messiah’s birth the first visibility of Jupiter was an exceptional occurrence that is partly explained on the http://www.star-of-bethlehem.info site. Jupiter’s first visibility after passing near the sun is an annual event. Jupiter’s first visibility in October 2016 is presented in the following four photos (photos taken in southern France). The highest “star” is the planet Mercury. Jupiter / MUL.BABBAR is the lower “star.”